Last fall, while I was actually 15 weeks pregnant I climbed South Sister in Oregon's Cascade Mountain Range.  It was an amazing hike with gorgeous panoramic views of breath-taking scenery.  It was also one of the most exhausting things I've ever done physically.  I'm an avid runner and even the half marathon distance races I've run were not nearly as hard as this climb.

Well, the Anise Jacket for me has been almost like climbing South Sister.  I started this when the Coletterie was hosting the Anise sew along back in September.  I quickly forged ahead with my muslin, underlining, bound buttonholes etc.  Then I got totally sidetracked by Thanksgiving, Christmas, and an unexpected move.    Now I'm kind of set-up in my new sewing loft in my new house.  I still have a lot of organizing to do, but this Anise was nagging at me to finish.  Partly because I've made it a 2013 goal to finish the projects I've started, but also because I intentionally cut this in a extra big size so it would fit my pregnant belly!

Here is the progress update.  I've got the lining inserted and hemmed.  I've got the buttons sewn on.  Now I'm hand stitching in the sleeve lining.  Gosh!! All this hand-stitching is so time consuming!  I keep thinking, "I'm almost done, I'm almost done!." But it's like that South Sister climb.  I can see the top, but it still keeps taking forever!  Two weeks ago I thought I'd be wearing it to work by now.  Hasn't happened yet.

I'm really hoping tomorrow is the day!! Can I get the stupid sleeves hand stitched in one evening???

Here are some pictures I took on that South Sister climb.  It sure was amazing and I'm hoping to do it a few more times this summer! 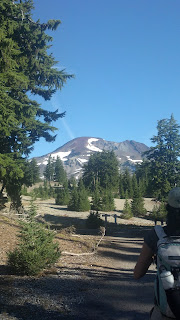 Below is a picture of North and Middle Sisters from the summit and also our lunch break on the false summit .  It looks like it would be just a easy jaunt up to the top, but in reality it's an arduous and grueling climb of 3 miles up steep banks of scree.


After it was all done I felt so accomplished!  I was fighting morning sickness and fatigue the entire time.  In retrospect, it was perhaps foolish of me to even attempt this climb while pregnant and in the full throws of the first trimester purgatory.

Here's hoping I'll feel the same way when this damn Anise is complete.  I think I'll name her Charity in honor of South Sister.